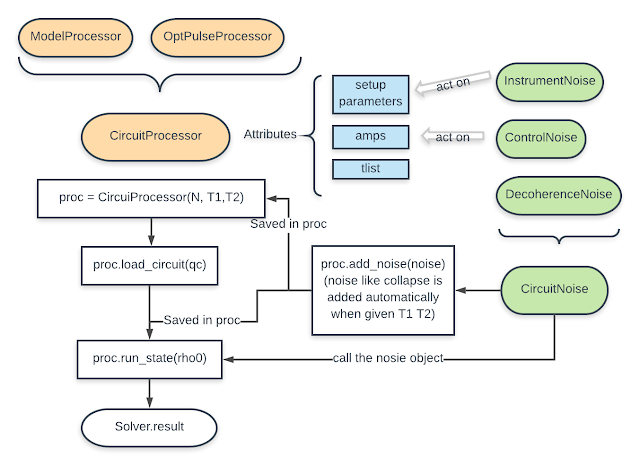 We are now at the point to include noise into the simulation. The decoherent noise characterized by T1 and T2 time has already been implemented, but we want to generalize it to different types of noises and separate it from the processor class. The above flowchart is from the blog of last week, where I wrote some of my thinking about the noise that we are dealing with. After some discussion and study, I now have a relatively complete view of the noise objects.

The figure above shows how the noise is processed in the circuit processor.  The noise is defined separately in a class object. When called, it takes parameters from the processor (like operators or coefficients), modifies them and returns them to the processor. However, this design has a drawback. Since the Hamiltonian saved in the circuitprocessor is a list of operators and their amplitudes. It restricts the form of the noise, for instance, it is not possible to create noise with coefficient represented by string based functions.

To allow more diversity in the noise we can use the newly implemented class qutip.QobjEvo. The QobjEvo consists of evolution elements qutip.EvoElement, which contains the information of the Hamiltonian operators, the coefficients and the time list. The advantage is that it allows different types of time-dependent coefficients for different EvoElement.

With this the noise can be defined independently from the circuit processor, for instance:
The noise objects are defined and saved in the processor and won't be considered until the calculation of evolution is required. The workflow is like the following:
The final QobjEvo and collapse operators sent to the solver is illustrated in the flowchart below, where the colour yellow denotes the contribution of circuit processor and green the noise objects. 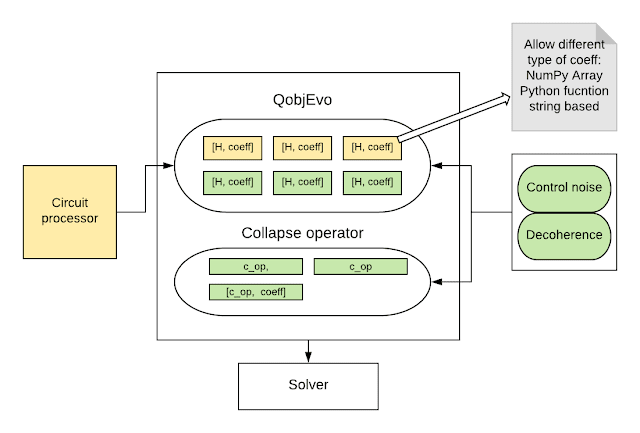 The advantage of this design is its flexibility and compatibility. Different types of coefficients, as long as they are allowed in the QuTiP solver, can be used to construct the noise object. We can also easily implement a framework for user-defined noise classes. The limitation is that if NumPy Array is used as coefficients, it has to have the same length as tlist, so it is difficult to add e.g. noise with smaller time interval than tlist.

An example with jupyter notebook can be found at https://github.com/BoxiLi/Exaples_GSoC/blob/master/CircuitNoise.ipynb 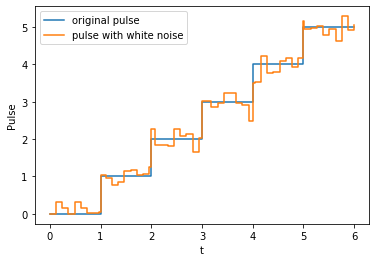